ake and sell an awful lot of hop inspired jewelry and beer related accessories. Hops are what make beer taste like beer. My DH is a home brewer and we are entrenched in the craft beer scene in Vermont and Asheville, NC. What started as a lark to wear at beer festivals has become a serious piece of my business. So much so that I couldn’t keep up with the demand just using aspic cutters to make the beads.

My DH said that there had to be another way. And he was right…..as always. I started with the Cricut Cake Cutter. It was meant to cut fondant and that’s about the same consistency of raw polymer clay. And it worked for awhile. I switched to a MAC and they decided not to support that OS. I was able to cobble along with a half broken PC laptop while desperately looking for another option.

We searched around and found a professional cutter  – the Silver Bullet – that looked like it could handle the raw clay. And it does. It’s BIG and powerful and able to cut, etch, carve, and 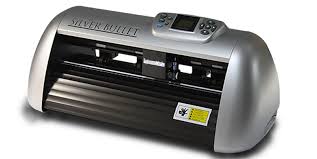 all kinds of wonderful things on all kinds of media. It was a huge investment.But something that we needed to do.

About the same time Alison Lee at Craftcast.com found out I was cutting raw polymer on a digital cutter. She asked if I could do a class using the Silhouette Cameo with polymer. She already had several classes using the Cameo to make projects from paper and metal clay. Her base had the machine and she wanted to give them something else to do with it.  I wasn’t sure if I could get it to work with polymer. I googled and didn’t find a lot going on with polymer. There were just a few instances and in all cases the clay had to be very, very, very thin.

I had a friend come over who was using the Cameo with metal clay. We tried everything. We could get it to cut, but it left ‘smoosh’ marks all over the clay. The only way it would work was if the clay was really, really thin. I didn’t think that would be every useful. Then the DH poked his nose into the studio to see how it was going. Hair was being pulled out at this point and there was a lot of swearing. We recapped the problems and he looked it over. Then he very casually said -“why don’t you take the cap off the blade?” Yet again…. he was right. That was the secret. 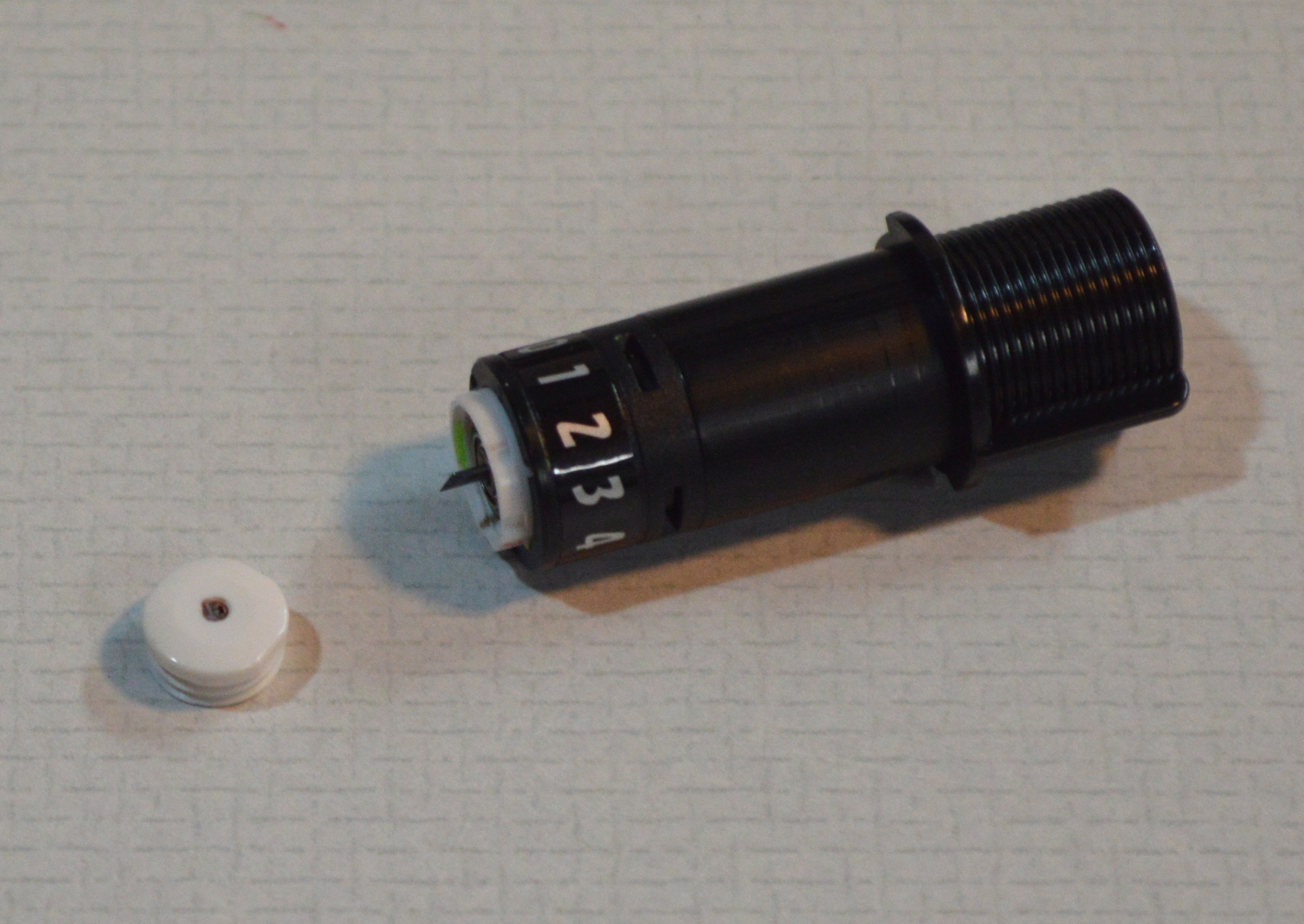 It was the cap that was causing the ‘smooshing’.
With that gone we were now able to cut thicker pieces of clay that were more usable. But the Cameo still had a limit to the thickness it could cut. Mostly because of the layout of the machine that was meant to cut paper, card stock, and vinyl.

I was able to create a version of my Fantasy Flower Garden necklaces for the class. (The image at the top of the page is a bridal version of that collection). I even used the Silhouette Studio Software to design the flower shapes, colors, and layout of the piece. 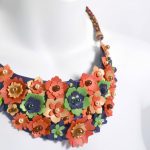 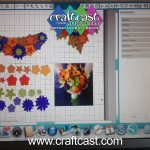 I continued to experiment with the Cameo to create other projects. I made some ornaments and some what-not bowls. 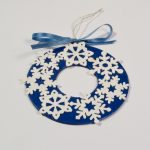 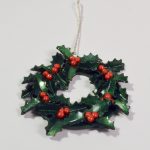 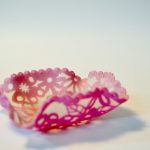 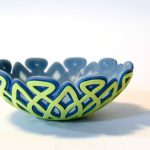 About a year later Silhouette announced a new machine  – the Curio. It was built to handle a variety of media in different thicknesses. It has adjustable plat

forms and a dual tool holder. By now I was on Silhouette’s radar and was able to score a machine early on for testing with clay. It worked great. I could cut much thicker clay and could even use special tools to carve the raw clay.

My next class on Craftcast took advantage of those properties. I taught my recipes for faux gemstones and ivory. Then we created a box using the faux ivory and the Curio to cut out spaces to inlay the faux gemstones and carve designs on the lid and sides of the box. 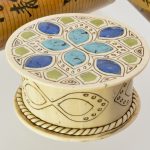 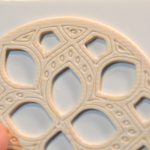 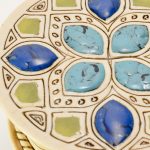 Last year I connected with Terri Johnson who organizes the All Things Silhouette conferences. I did presentations at two of the conferences last year and will be participating this year. The conferences are held outside Atlanta, GA  – June 10-11 and November 4-5. Terri puts on an A+++ event. Lots of great people sharing lots of tips and techniques. Since I never got these machines to use them for the purposes they were intended I learn quite a lot at these events. lol

I host a PC SILie Lovers group on Facebook. The ‘files’ section has lots of documents that cover the settings I use to cut different thicknesses of clay. There is a lot of useful information there. But the best way to learn the tips and tricks is by taking the Craftcast classes.

I have worked with polymer clay for over 18 years. My work has been featured in books and magazines. I have won national and international awards for my pieces. I sell my work at local Fine Craft Shows, in a few Vermont Galleries, Breweries & Home Brew Shops in several states, and on Etsy. I love polymer clay as a medium because it can be used in so many ways.I love experimenting with its properties and the various ways it can be used to create all types of artful and functional pieces.

Every month Silhouette gives Elite Affiliates a special sale that is available with their codes. The sales usually last from the 1st – 15th. There are always some great bundles of machines and products. This Read more…

I am busy pulling together video and samples for my upcoming Craftcast.com class. I’ve been experimenting with making my own customs silk screens using my Silhouette Cameo & Curio . I always look forward to Read more… 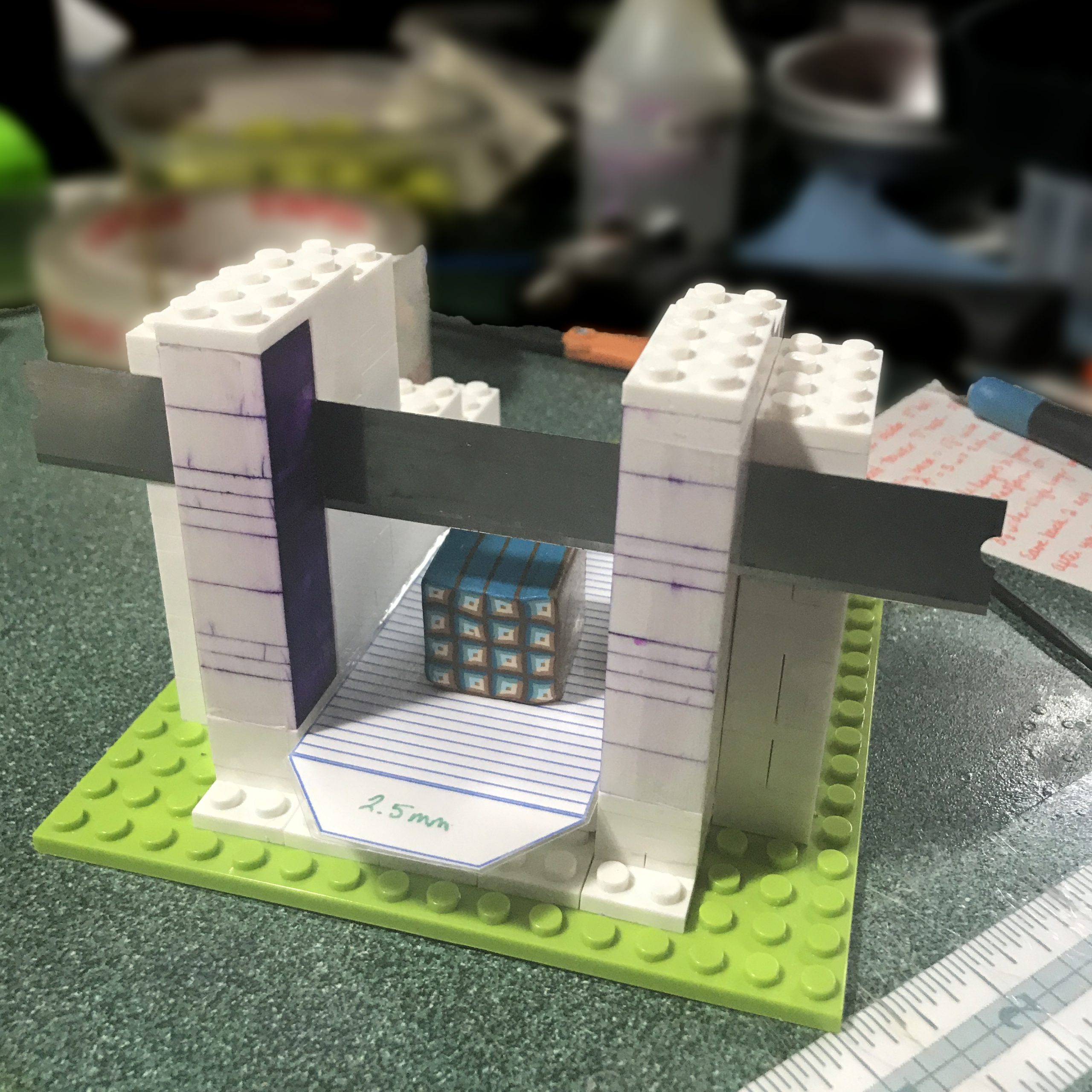 As I write this, the country is at almost full shutdown because of COVID – 19. So many people are stuck at home trying to fill the days and nights with anything to keep our Read more…