As I write this post the country and the world are in upheaval. Nothing that was normal in our lives is still normal. We’ve been quarantined for 3 months because of the COVID Pandemic. Living in a rural community and working from home protects me from the daily threats that others have had to deal with. I am heartbroken as I watch the death toll rise to over 100,000 Americans and 400,000 worldwide.

I tearfully watch the thousands in the streets protesting another brutal murder of an unarmed Black man by a white policeman. This has been building for years. And with 30 million plus out of work there are a lot of people with time on their hands to finally get to the streets to protest the heinous amount of police brutality that has been captured in the era of cell phones and surveillance cameras. Hopefully something will come from it this time. But, I don’t expect much considering who the current occupant of the White House is. It will be up to local governments to step up. However, that is topic is deserving of a post of its own.

In the three months of quarantine I did manage to prepare another class for Craftcast.com. I taught how to make your own custom silk screens for polymer clay.

But once that was done I had a real problem getting motivated in the studio. I felt totally uncreative. I spent some time cleaning up from the craziness of class planning. I made a few pieces using the sample silk screened sheets of clay. However, there really wasn’t any joy in it.

When Silhouette introduced the Cameo 4 it also added a Rotary Blade. Lia Griffith had been cutting crepe paper flowers on the Cricut Maker with a rotary blade (you don’t really need one, sometimes cutting by hand is easier). She was a new instructor at the last All Things Silhouette Conference. Her table was next to mine outside the Vendor area and I was amazed at how many people were flocking to her table between classes. So, in January I ordered her book and some supplies to see what all the fuss was about.

The box sat unopened for several months. I opened it during my creative slump and it may have saved my sanity. I watched a ton of her videos. It took a few flowers for me to get the hang of it. But, once I did I found it very satisfying. Maybe it was because I was just following directions and not having to make creative decisions. Maybe it was the feel of the paper in my hands and how I formed it in a similar manner to polymer clay. I am just getting to the point where I am actually making arrangements, so I have a bunch of blooms that are just lying around for now. I plan on making some more until my creative spirit decides to return.

I have worked with polymer clay for over 18 years. My work has been featured in books and magazines. I have won national and international awards for my pieces. I sell my work at local Fine Craft Shows, in a few Vermont Galleries, Breweries & Home Brew Shops in several states, and on Etsy. I love polymer clay as a medium because it can be used in so many ways.I love experimenting with its properties and the various ways it can be used to create all types of artful and functional pieces. 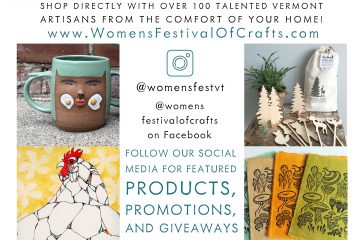 The pandemic has changed so many things that we took for granted just two years ago. While there have been a lot of bad changes, there are also some good ones. I miss doing in-person Read more…

Every month Silhouette gives Elite Affiliates a special sale that is available with their codes. The sales usually last from the 1st – 15th. There are always some great bundles of machines and products. This Read more…

I am busy pulling together video and samples for my upcoming Craftcast.com class. I’ve been experimenting with making my own customs silk screens using my Silhouette Cameo & Curio . I always look forward to Read more…